I love some good pub grub! But I have learned that I don’t have to go to a pub to get it! Taking the things I love to order and remaking them in a healthy way has become FUN!! So I made Healthy Baked Potato Skins for the win!! I’ve included 2 versions of them, but there are many other versions to try. 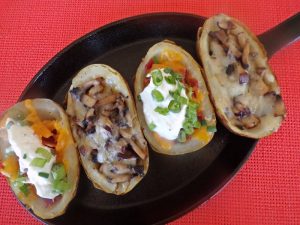 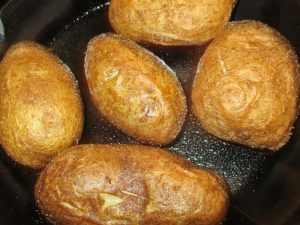 I made basic baked potatoes. 1 hour in a 350° oven will cook a medium-sized potato.

You can also put potatoes in the air fryer and cook at 400 degrees for 30 minutes and then test the potatoes with a knife. If the knife pierces the potato all the way through, it’s done. If not, cook for an additional 5 minutes at a time, testing for doneness every 5 minutes.

I really like to bake mine the day before and let them cool off and put them in the fridge overnight. This not only makes them easier to handle but it “toughens” the skin so that scooping out the inside of the potato has less of a chance of breaking through the skin. Leave a fairly thick layer of potato in the shell so they are stout enough to hold your ingredients. It will also make them easier to transfer from pan to plate if they are a little thicker.

Save the potato you scrape out of the skins for a side-dish later! I like to warm it up and mash it with some Laughing Cow cheese wedges and a little onion and slide it under a broiler. It gets all bubbly and brownish! YUM! I have some information about cheese varieties HERE.

I have an entire post dedicated to potatoes HERE.

How to count just the potato skins

I started figuring out the container counts next and that meant starting with the potatoes. In the name of science, I baked a few extra potatoes so that I could take the scooped-out shell and measure them in my Portion Control Yellow container. 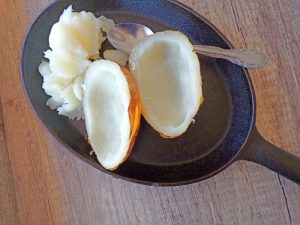 This was my experiment… I cut a couple of the scooped-out halves cut them in half. Then I managed to get 3 of those halves in 1Y.  That lets me know what my serving size can be 1 1/2 halves of the finished potato for 1Y. (I didn’t let these go to waste, garlic butter, and parm cheese under the broiler and they were a great little snack!) 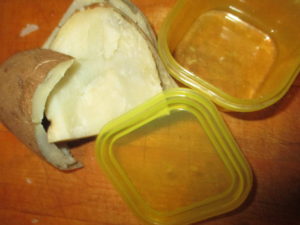 Since I have done the math for you, you can leave your potato skins whole and just stuff them.

Mix that with shredded cheddar cheese and melted butter. I just divided the mixture between the 2 potato halves. 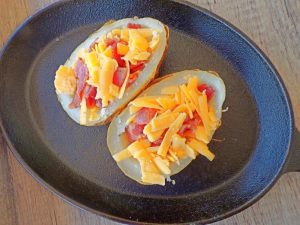 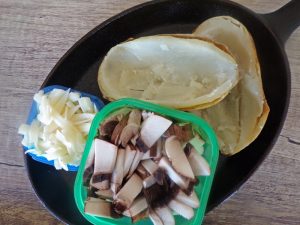 Next up is mushroom and swiss!! I just love these flavors for a burger so I couldn’t help but think of them for these potato skins!! I sautéed 1 cup of mushrooms with a bit of olive oil until they shrunk by about half. To that, I added shredded swiss cheese and stuffed it into my last potato half. 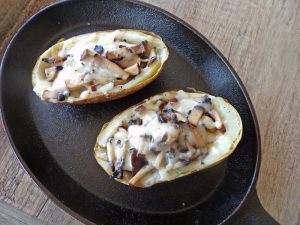 In my NuWave Oven, they take about 12 mins. But I can see inside of it so I just take them out when they get the color I love! 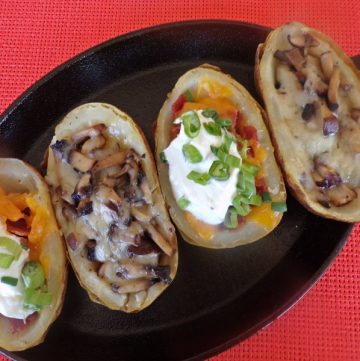 Swiss Stuffing for 1 potato half

What can you serve with Healthy Baked Potato Skins? 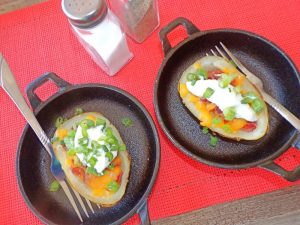 We love to grill!!  So I make these skins ahead of time and just put them in the oven for their final cooking while my Hubby grills steaks. I dress them with a few teaspoons of Greek yogurt like you would use sour cream. I have also made my Mayo Ranch Dressing to drizzle over them too!! Recipe HERE.