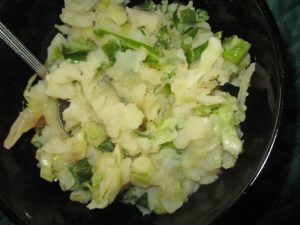 Traditional Irish colcannon is a favorite food in Ireland. The word colcannon comes from the Irish “cal ceannann”, which translates to  “white headed cabbage”. Colcannon is basically mashed potatoes and fried cabbage or hearty greens mixed together with green onions, butter, milk, and salt/pepper.

An Irish woman I knew brought it to a potluck supper and she gave me her recipe. I have adjusted it over the years.

I want to serve it with baked ham.  So I plan on making it for St. Patrick’s Day to eat some “green”  and not just wear some. 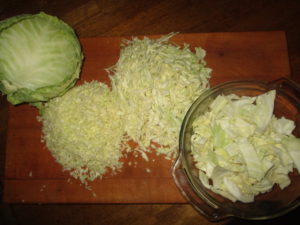 When I buy a big head of cabbage I usually prep it all at once. Egg Roll in a Bowl gets made for sure! Hubby likes me to cook some “tender-crisp” just a couple of minutes in the microwave with a little water. If I have any left from that I am sure to make some of this Unstuffed Cabbage Roll Soup too!

On to making Traditional Irish Colcannon 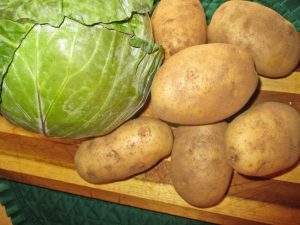 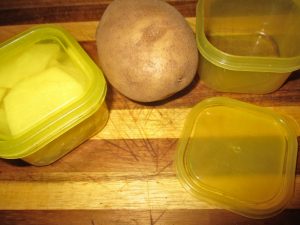 Simply boil them in low sodium chicken broth about 10-15 minutes till fork tender and mash them with a little bit of the chicken broth you cooked them in, a couple of tablespoons of butter, milk, salt, and pepper. Basic mashed potatoes…I like to use an old-timey potato masher because I want my potatoes to stay a little lumpy! 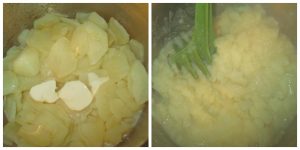 The next ingredients are the cabbage and onions 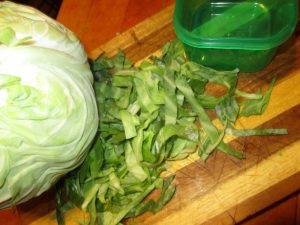 The long thin sliced shreds are what I like to make my colcannon with. I use the very outside leaves that are extra green for more color. But any part of the cabbage can be used

Started by spraying some olive oil spray in my skillet.  Took 2 cups of shredded cabbage or 2G and tossed them with 1 teaspoon of olive oil and 1/2 teaspoon of salt. I like to hand toss it making sure to cover as much of the cabbage as I can, massaging it in a little. A few tablespoons of the white part of green onion mixed in too. Chop and save the green part of the onion to sprinkle on the top of your serving. 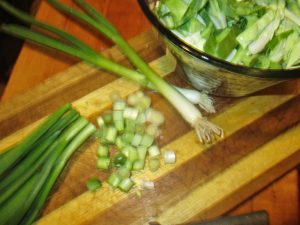 I “fry” my cabbage for a few minutes to get just a tiny bit of golden color. Then I add a few tablespoons of broth or water to the pan turn it down and put a lid on it so it gets tender and the liquid is gone. Sometimes I take the lid off and turn the heat up to get all of the liquid out of the pan. 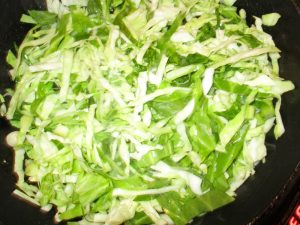 I start my potatoes and my cabbage at the same time and just keep warm the one that gets done first.

All that is left to do is stir them together and adjust the salt and pepper according to taste! The serving size is 1/2 cup + 2 Tablespoons. So I just measure it in my yellow and orange container (it holds 2 tablespoons) and the container counts would be 1Y 1/3G 1teaspoon oil and 1 optional teaspoon oil. (Because we drain the broth off we don’t have to count it.) 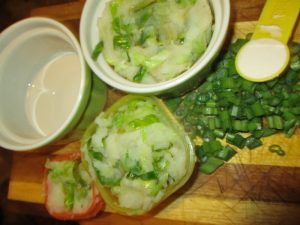 I like to serve them in ramekins because the traditional way to serve them is with a “well” made into the top of them a butter is put in the hole to melt. In the ramekin, the butter won’t leak over my plate when I dig in!! This teaspoon of butter is totally optional but highly suggested. Top it off with some green onions. 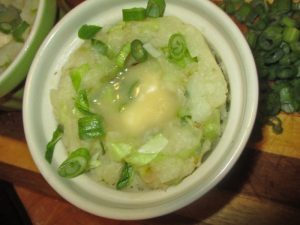 Another thing I like about them is that I can make them early in my day/week and then just heat them up when it is time to eat. 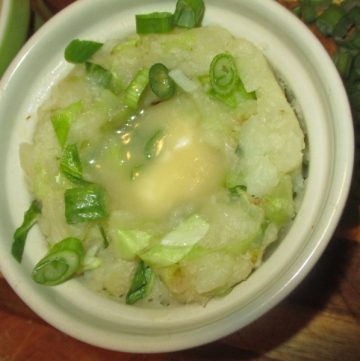